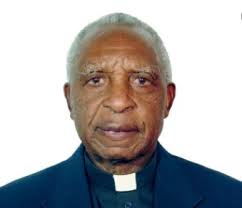 Prominent Roman Catholic Cleric Father Ribeiro has been buried at the National Heroes Acre becoming the first priest to be buried at the sacred shrine.

President Emmerson Mnangagwa said the late cleric, writer and composer led an exemplary that the country’s youth should be inspired to live vice free lives, shun drugs and corruption.

“We thus, mourn a great son of the soil, a Roman Catholic priest, Father (Baba), a brother, a comrade, composer and novelist. He worked tirelessly and used his diverse talents to nurture the souls of many people in our beloved country,” said the President.

The late father Ribeiro, died last Thursday at St Anne’s hospital in Harare after a short illness had a long career in the catholic church as a cleric and composer of church hymns.

In his condolence message, National Arts Council of Zimbabwe (NACZ) Director Mr Nicholas Moyo described the late father Ribeiro as one of the pioneering writers in the native language during the colonial era.

“His first two Shona novels Muchadura (1967) and Tonderai (1969) winning him prizes in competitions arranged by the Rhodesia Literature Bureau. Muchadura also sold a record-breaking 3000 copies and has been used as secondary schools set book”, Moyo said.

“The late Priest has left a rich legacy for the country in his literary and musical works which have inspired many. These works have stood the test of time and have become part of the country’s cultural and political heritage”, Moyo said.