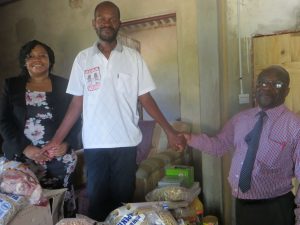 NYAZURA-The Government and the National Arts Council of Zimbabwe (NACZ) this week presented groceries and an assortment of home consumables valued at $7000 to actor/comedian, Lazarus Boora, popularly known as “ Gringo” who is currently convalescing at his rural homestead in Rukweza after undergoing surgery in October last year.

Presenting the groceries NACZ Deputy Director Mr Josia Kusena said the government and the council had seen it fit to provide the token assistance to the veteran actor to ease the burden of taking care of his family during the time he was tending to his health.

“This token is coming from the government of Zimbabwe through the Minister of Youth Sports, Arts and Recreation Dr Kirsty Coventry, The Deputy Minister Cde Tino Machakaire, the Permanent Secretary Dr Thokozile Chitepo, the Director National Arts Council Mr Nicholas Moyo and the Zimbabwean people at large, to say to you we love you, we are with you during this time and we wish you a speedy recovery and return to full health,” he said.

In response, the popular Boora said it was heart-warming for the government to even think of him at this time when there were so many issues that could have been given priority.

‘To me, this is more than just assistance, it is a recognition of my talent by the people of Zimbabwe. Many artists are acknowledged when they die, but for me its an honour to be recognized when I am still alive, through this present,” he said.

The jovial Boora said he was recuperating quite well and he had resumed light acting duties for social Media “Skits” on his way to full recovery.

“In December I had time to do a few episodes for some social media shows and I hope to be back soon to conclude some projects that I was working on,” he said.

A father of 7, Boora is employed full time by an Agro-processing and Distribution firm in Harare and drives to Rukwezva his Village homested regulary. His homested features a modern four roomed house complete with an orchard of indigenous and exotic trees that he enjoys tending too.

Boora was propelled to fame by the 1997 ZBCTV hit drama Series “Gringo” and he subsequently featured in other spin-offs of the show like “Gringo Ndiani” and “Gringo Mari Iripi”. He recently starred as Gibbo in the new ZTV series “Village Secrets”.